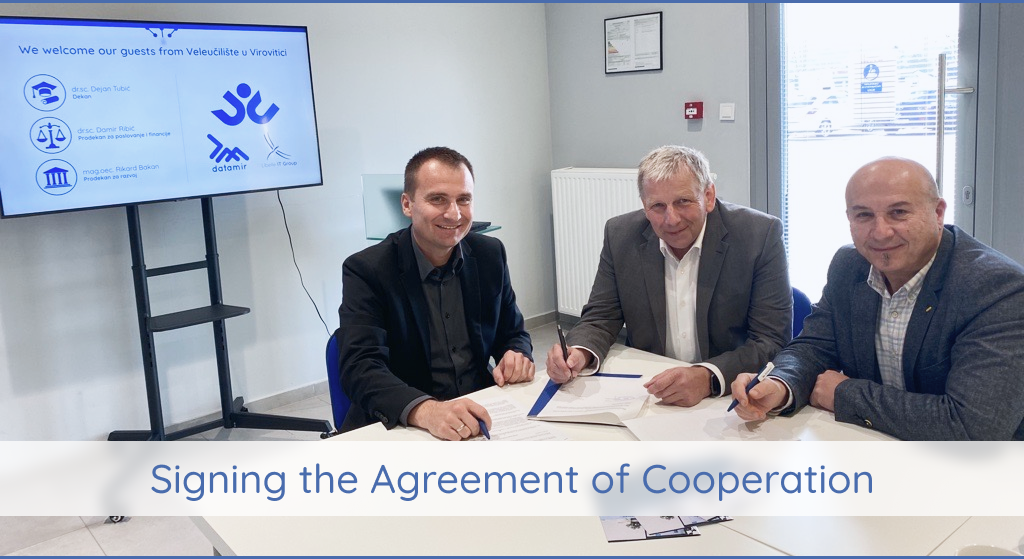 Last week, on 17th of November, a cooperation agreement between Libelle IT Group (datamir d.o.o.) and the University of Virovitica has been signed.

In the name of dean of the University of Virovitica, doc.dr.sc. Dejan Tubić, vice dean for business and finance, dr.sc. Damir Ribić along with vice dean for development, mag.oec. Rikard Bakan, visited datamir d.o.o. in Lipik and met with the founder and CTO of Libelle IT Group (datamir d.o.o.), Mr. Hans-Joachim Krüger. Together they discussed new possibilities and opportunities regarding newfound cooperation agreement.

Many of the former and present students at University of Virovitica are employed in datamir d.o.o. Heads of Libelle IT Group are more than happy with their developments and work they’ve done in the company – which is one of the main reasons for this agreement.

Some of the benefits this agreement brings to the table are the option of doing the mandatory professional practice in the company and, of course, the possibility to become permanently employed upon completion of studies.

What kind of work can students expect in datamir d.o.o.?

I started working here earlier this year, in April to be exact, as a student at the University of Virovitica. I was first introduced to the HA team and working in backend development until I got more familiar with the architecture and logic behind the products. Once I had enough knowledge and practice, I was moved to the IT team where I continue to work on development of New Generation Software and an upcoming product – Libelle DataSuite. As I am getting closer to the completion of my studies, I plan to do my bachelor thesis based on the development and the work I’m doing here in the company – which is another great benefit of the aforementioned cooperation agreement between the University of Virovitica and Libelle IT Group (datamir d.o.o.).
- Antonio Šubert, student at University of Virovitica

In April last year I started doing professional practice here at datamir d.o.o. and continued to work as a student until October, where I became fulltime employee after completing my studies. I was placed in HA team, doing work in high availability and disaster recovery, and as a student I was mainly focusing on my thesis, which was closely related to the work I was doing at the time – Oracle database backups using Libelle DataSuite platform. I was given all necessary materials and tools, such as test systems and system documentation, to complete my thesis. During thesis work I was also given direct help from the founder and CTO along with a couple of senior employees. Upon completion of my studies, I became a fulltime employee and continued working with HA team, but now I’m mainly working on maintenance and improvement of an already existing product, where primary focus is on High Availability for PostgreSQL database. Working here, first as a student, and now as a fulltime employee, has taught me a lot not only about development, but database administration as well, which is what I’m the most interested in and what I would like to continue working with.
- Marijan Bebek, former student at University of Virovitica‍

‍
These are just a few examples of what can be achieved with the cooperation between the University and the company. Both our founder and the representatives from the University of Virovitica see great potential in this cooperation agreement and are very excited to see what the future holds.

Lipik, Croatia 2022
datamir is a company of Libelle IT Group
Privacy
PrivacyImprintPricingBlogContact